League of Extraordinary Bloggers: When I Was a Kid..

The Crooked response to this: When I was a kid, my favorite COMIC was THE X-MEN!

Being a kid in the 90’s it was ALL about the X-Men for me. Comics, toys, video games, cartoons, clothing, it was no holds barred. I got hooked around1992-93 when my grandmother bought me my first batch of random comics which included X-Force #1 and from there on in it was on.

That early X-Force comic hooked me. While I was not the biggest fan of X-Force and that god awful artwork by Rob Liefeld there was something else out there that was, the X-Men. I began picking up back issues with artwork by Jim Lee and was mesmerized. Lasers! Neon costumes! Skin tight costumes on ladies! 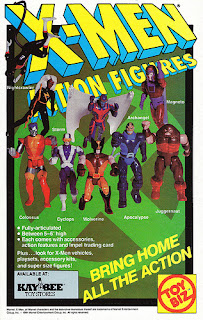 My love of the X brand grew exponentially over time. I dove head first into the Toy Biz X-Men toyline and quickly amassed an X-army all the while grabbing up any X-Men comics I could find. This stuff was gold to 10 year old me.

Being a big time comic art fan I found myself devoting hours to doodling and drawing various X-people most notably Wolverine, Gambit and Cable emulating my two favorite artists, Jim Lee and Andy Kubert. Needless to say a great many notebooks from grade school are chock full of comic book art, far outweighing actual notes I should have been taking. 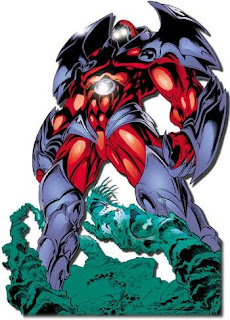 Two big events really tickled my fancy, The Jim Lee run on “X-Men” and later in the 90’s the “Onslaught” saga. The Jim Lee run on X-Men was just awesome. Magneto was screwing with everyone and lived on the moon while battles broke out damn near every issue. The Onslaught saga brought old man Xavier out to be a crooked dude himself and becoming the villain known as Onslaught (those names are too good).

The X-Men still remain dear to me to this day. While I dont pick up the comics as much as I would like (there are NO comic shops anymore, wtf) I do snag a few issues of Comixology when I can or a trade paperback. The comic bins I have held on to for all these years now reside in my basement, never a single issue sold. I think it is about time I crack open that time capsule and go back in time for a few moments.

So dear readers, were you swept up in the X-Craze of the 90’s?

Cool article right? Why not check what other League folk came up with: