Introducing a new area to the blog, Crooked Art where I will spotlight an artist whose work is inspiring. This featured artist is Tom Krohne, The Artist Who Walks Like A Man, monster maker and master of the splash page. Tom’s art touches on all things nostalgic and does so with a great color palette and enough attitude to put the WWF in 90’s to shame.

What is your primary medium of creating? Tools of your trade?

Nine times out of ten it’s a regular pencil and some scrap of paper that I doodle an idea on. That gets scanned into the computer and fleshed out to the final stage in Photoshop using my Bamboo tablet. They’re old version but they get the job done.

Well it was always monsters up until about a year ago when I switched gears to villains. Comic, cartoon, toy line, video games… I can’t get enough of the delightfully wicked bad guys and girls that make like a living hell for the do-gooders. 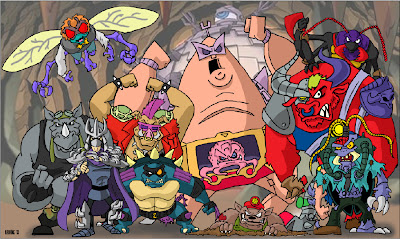 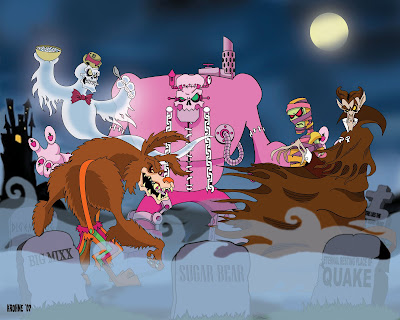 Of mine? The Cereal Monsters piece, the Inhumanoids, the Evil Horde, I like group shots that look like insanely posed portrait shots of these rowdy bunches of individuals looking as if they were gathered together for the company newsletter cover photo.

Some spark of an ides pops into my head, might be from an article I’ve read or someone’s latest toy aquisition, but it gets in there and starts swirling till it bleeds out onto a scrap of paper, gets forgotten about for a while, then found on my desk, scanned into the computer, I research the subject matter and get to photoshop for the penciling, inking and color.

How do you break through creative blocks?

Watch a lot of cartoons and toy hunt. That or read comics. 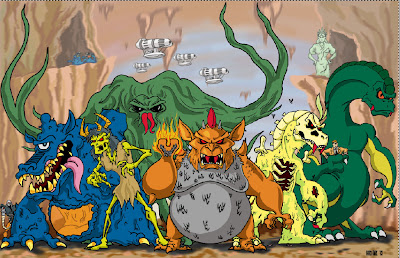 A mess. I’m surrounded by monster toys and old monster comics, my desk is littered at this moment with Mego parts to make a Christopher Lee Frankenstein, Briefer Frankenstein and an Oliver Reed Werewolf. Oh and my new Lincolnstein who doesn’t have a home yet.

Where do you find inspiration?

When did you start getting into creating art? Has it been a lifelong passion?

First thing I remember drawing was a picture of Godzilla fighting King Kong on the inside of a shoe box lid at the age of five, been doing it ever since.

Advice for up and coming artists?

It’s a tough industry, 36 years and I still haven’t made it. 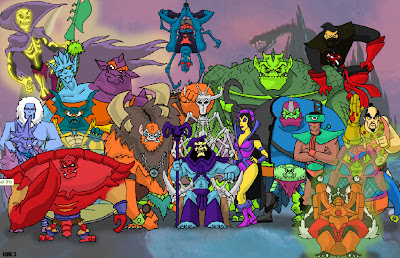 Favorite cartoon as a kid?

Could never pick just one. I still collect the old TMNT line (had them all and gave them away), but I’m partial to the 80’s fantasy.sci-fi lines like MOTU and Thundercats.

If you could live in one fictional place, where would it be?

Monsterex… google him ( I did and never knew about this oddball TMNT villain! Check him out)

Thanks again Tom for being the featured artist! You can check out more of his work on his blog here (and his website here) or better yet buy some of his rad prints from his Etsy shop!

Want to be featured? Drop an email!